Today we had to play a game called "Ki-o rahi".We also had to verse room 1 which was kinda weird for me since 2 of my friends (Rozaidah & Laolao) are in room 1.Once we went to the courts outside room 3 Whaea Kelly put us in teams.First she told us what number we are & I got to be in team 1. Whoever got to be in team 2 they had to go to the netball courts instead.The team I was in had to attack the players.When a player in the green team (Room 1) had the ball we had to take off one of their tags and they had to pass the ball to one of their team mates.On the first few rounds we got 12 points while the green team had 18 points.Then the green team had to switch over and go to the netball courts.The yellow team (room 1) had to verse us and we got about 7 or 8 points.They got 12 points.Team 2 (from my class) had won 2 games. 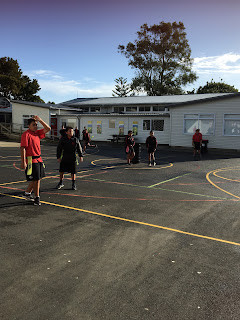 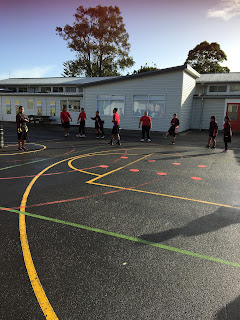 
Task description - Today we had to learn about decimals and we had to try and understand them while watching a video.
Posted by Farah at 12:22 No comments: 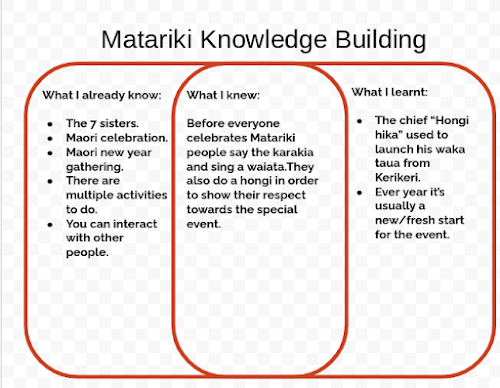 Task description - Today we had to read a book which is all about Matariki. Even though it might've already passed for our school we decided to celebrate it on Friday.
Posted by Farah at 10:38 No comments:

“Your parents wanted you to stay here until they find you”.Lotus was confused but she knew the villager wouldn’t leave her alone.”are you going to stay with me? And who are they?” He went quiet.Once they walked inside she knew where they were but she didn’t say anything.
The place they were in was called “The Himuro Mansion”.Everyone who entered the mansion would not make it out alive.
The story of this was dated way back in the past.”There was a man and woman who loved each other but they had paranormal activities which couldn’t stop.Once they found a way to prevent this from happening it was fine for them.The ritual of this is to raise a girl and once she reaches the exact age (which is unknown) she would be tortured.Her remains would be at the gate.” This story is so messed up.
Lotus asked “why are we here? Can we go somewhere else please?” “You are asked to stay here so don’t complain”.Once they opened the door a little girl was sitting down crying.The male villager whose name is Park was about to run away but Lotus stopped him.”She needs help.Can we help her?” “I suggest  not.You don’t know who she is.Stay away from her at all costs.”
Posted by Farah at 12:40 No comments:

Task description - Today for inquiry we had to do a task which is all about "Biosphere 2".Biosphere 1 is all about the earth.
Posted by Farah at 12:14 3 comments:

Today we had 2 special guests who were Joseph & Elizabeth Parker.

knew very well.Once they both came in Joseph started to say how thankful

he is to everyone.Elizabeth was also very happy to be there.

Joseph also stated that if you believe in yourself you will feel better with yourself.

But then he also said that “nothing,can beat hard work” which is really helpful to

ourselves.Mr Burt also added that we need to sanitize our hands even when our

(Warning:The village is completely abandoned and the village is real.The mansion is very scary and it’s real.The mansion’s  story is completely real!)
One day there lived a girl named “Lotus”.Lotus lived in a very small but friendly village called “Inunaki Village”.This village has a very bad/terrifying past.Here’s the story,once there lived a small girl named “Rose”.Rose is friendly to everyone who used to live there.
But one day she accidentally fell into a pond which was very deep.No one could save her so she had a sad death.The villagers were mourning over her death.Around 12:30am a villager grabbed a weapon or at least something to attack the villagers.
Some nights she would hear noises coming from the small villages.Once she even heard a scream which crept her out the most.But she even saw an apparition of a male with a knife or axe.
Once that villager grabbed that sincere weapon they snuck inside other people’s small house and started to hurt them with it.The most important thing she didn’t know was that the villagers who usually look after her are actually the spirits of the scene which happened before.
Everyday she would go by the pond and get to see a small girl who was once known as Rose.Lotus was scared but it turned out to be her reflection which was weird since she actually saw a small girl before.
Lotus soon ran back to the village and she was so scared so she never looked back.Her parents were confused but as soon as Lotus described the girl’s facial features they went silent.They walked towards Lotus and grabbed her.Her father threw her outside which nearly killed poor Lotus.A male villager walked towards her and took her with him.
Lotus was screaming & crying since she was injured.The male villager immediately covered her with a blindfold and tried to keep her warm throughout the journey.As soon as they arrived at their destination Lotus kept quiet.The villager took off her blindfold and held her hand to keep her safe.
Posted by Farah at 14:14 3 comments:

Hi my name is Farah and I am a year 8 student. My teachers are Mrs Stone, Mrs Tele'a, Mrs Ilaoa, Whaea Kelly, Ms Tapuke and Mrs Moala. My favourite sport is netball. My favourite colours are purple, white, blue and black. I like to play games and paint.

Who is visiting this blog?